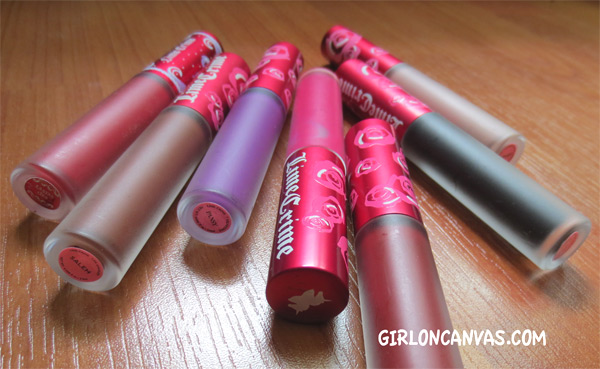 If you are a makeup/product junkie like myself you probably heard of Lime Crime makeup. I found them on Instagram a few years back before they had a huge following. I’ve been hearing some talk lately about Lime Crime and it’s website issues. I was a part of it but lucky for me I used PayPal to make my purchase, so my credit cards were not compromised. But I think it’s something good for me to write about because not only do I love makeup and online shopping – but I manage and work for an eCommerce website.

I didn’t make my first purchase with Lime Crime until around Fall 2013 when they had a sale during the holidays – I think it was for Black Friday. It was 30% off, which was pretty significant. I do not have a beauty license or anything of the sort so I do not get “makeup artist discounts”. Anything over 20% is a big deal when it comes to high-end make up – at least for me. 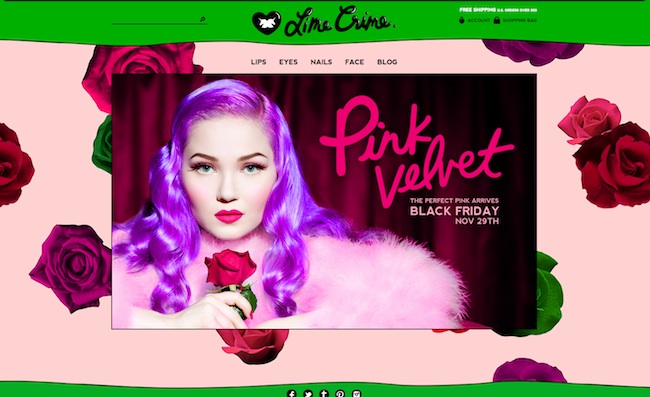 I bought the liquid to matte lipsticks called “Velvetines”. I purchased red velvet and pink velvet – at that time they only had 3 colors to choose from. There ended up being some kind of issue with their eCommerce platform (which name escapes me now) it was discounting items they wanted to exclude from the sale. So they refunded people their money and then charged the right amount. I know many customers were not happy with this – in reality Lime Crime should have just bit the bullet and let it go. Charging customers twice does not look pretty no matter how good your matte lipstick is. It looks bad on their credit card statement and can take days maybe even weeks to “drop off” someone’s account.

As I mentioned before, I used PayPal to make my purchase(s) on this website, and because of this they could not refund and then charge me again. They had to stick with the sale price. But with a big following comes people talking and before you know it some customers realize some were honored discounts and some were not. Not long after this incident they revamped their website and started using the Magento platform. I had heard of Magento – it was something we looked into at work to use for our products. I was kind of surprised because it costs about 15k per year to use this platform. Lime Crime does not have THAT many products, maybe about 50 all together? In my mind Magento was for bigger sites like Amazon, something with thousands of products and lots of revenue but I could be wrong. 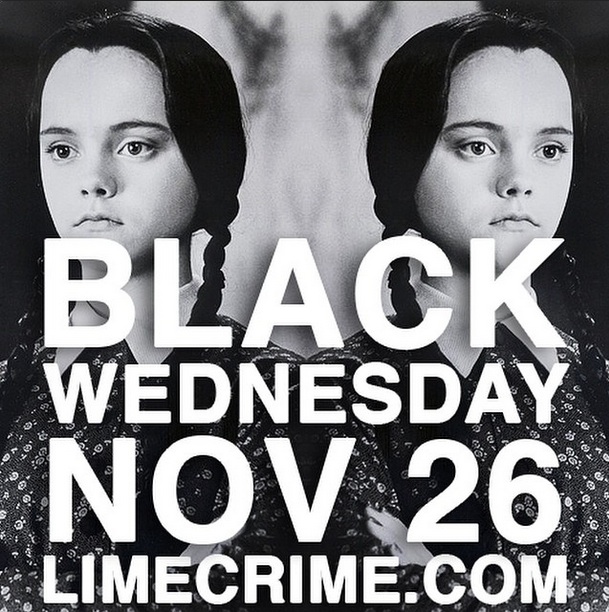 The following year in 2014 they had another “sale” for Black Friday – but this time it was “Black Wednesday”. The Wednesday before Black Friday. Their products (mainly the Velvetines) that were sold out for weeks were miraculously back in stock. The “sale” ended up consisting of $2 off lipsticks, and $2 off lip glosses. What? You call that a sale? That’s the best you can do for BLACK FRIDAY? Not to mention the Velvetines – no discount. Whatever, I was pissed but I purchased anyway. Again, using PayPal.

In February 2015 I received a letter from them to learn about the security issues with their website. The letter stated that customers who placed orders October 4, 2014 to February 15, 2015 were victims of this crime. As quoted from their website: “Perpetrators did this by installing malicious, self-concealing software known as ‘malware’ on our server. Thieves were collecting some of our customers’ personal information while customers were in process of checking out on our site.” Knowing what I know from the eCommerce world – this wasn’t Lime Crime’s fault. They had their SSL in place, they did everything they could do. But the smarter technology gets, the smarter the bad guys get too. I know that Sephora was going to be carrying Lime Crime and now they are not, and I think it is because of this. Lime Crime was not the only online business to be affected by this particular issue.  See articles one, two and three. 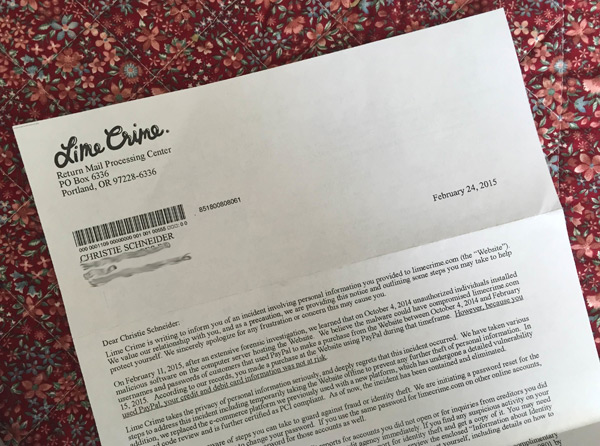 The internet for some reason has gone crazy in using this situation to create petitions against Lime Crime and it’s owner. Some blogs claim that “millions of people petitioned against them” to go to IMATS NY when it was merely 12k signatures. (According to Lime Crime’s instagram, they did attend IMATS NY)  People are blogging about the issues and promoting others to unfollow them and boycott. Why even bother? Why waste your energy on someone you dislike so much? I can’t imagine that makes you feel good… even as a human being.

“I was once asked why I don’t participate in anti-war demonstrations. I said that I will never do that, but as soon as you have a pro-peace rally, I’ll be there.” – Mother Theresa

Some even mentioned that Urban Outfitters has pulled Lime Crime from its shelves. Well it certainly doesn’t look that way on  UO’s website. Even the Urban Outfitter’s store in Herald Square NYC still has everything in stock! Since I live close by I even took a photo for you on 5/24/15. 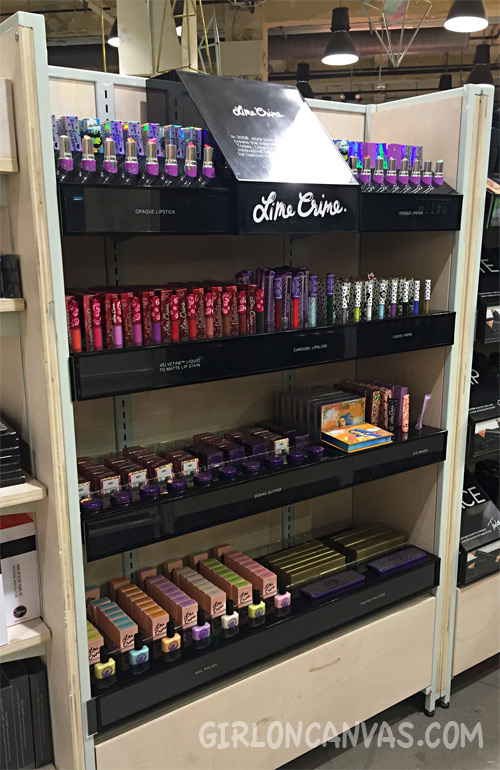 Did you not hear of a similar issue that happen to Target early last year? I was a victim of that too. My bank automatically canceled my account because I made a purchase in the time frame Target had a problem. Not to mention while my new card was being mailed to me THAT card information was stolen. Not even 3 weeks after receiving my new bank card, I had to get another one. Someone cleared out my account at GameStop. I had to fill out a police report and it took over a month to get my money back.  But you won’t find me leaving hate comments on GameStop’s social pages!

If you’re worried about the money that was stolen from you’re account or credit cards being opened in your name then you should look into identity protection. Call your bank or credit card company, get it straightened out. That’s what they are there for! To open credit cards you need your Social Security number and I’ll be damned if you entered it in to place your order on Lime Crime’s website!! Leaving nasty comments on Lime Crime’s social media is not going to make your problem go away. We are all well aware of how bad identity theft and credit card theft has been, so go take action in the right direction!

“Lime Crime” is searched for near 246,000 times per month (according to the Google Keyword Planner). “Lime Crime Velvetines” is searched for 33,000 times per month. They seem to be doing REALLY well with their brand they worked so hard to build. It doesn’t sound to me like this company NEEDS to steal it’s customer’s money.  Based on these facts I really do not believe Lime Crime was out to steal anything from anyone.   If you’re going to go on defense and say well “Doe Deere said this _______ to a customer, she’s mean!”  Well HELLO everyone is practically attacking her I’d probably react the same way!   That is life and that is the risk you take when you shop online – just like driving a car.  We all know the risks, but we still do it.

I’m just looking at the facts based on my experiences – I could in fact be wrong. I don’t think Lime Crime is perfect but my experience with the makeup has been great.  I know also know there is a lot of bad history behind Doe Deere (Lime Crime’s owner) and I’ve read some things that may or not be true about her. Will it stop me from using their products? No. There’s no hate strong enough to override my love for makeup. So with the hope they iron out their kinks and provide better customer service in the near future I’ll continue to use their makeup.

I am hoping this year they bless us with a big sale because $2 off lipstick is pretty bland. I cannot believe that the Lime Crime Velvetines have gone from 3 colors to 12. I am really excited to try ‘Faded’ and ‘Riot’… I’ll be sure to use my PayPal at check out too. :o)

Advice for brides from a Non-bride, Bride.